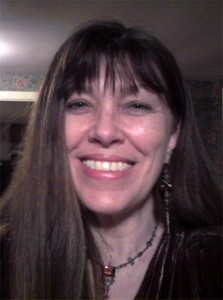 Kathi Kolb is a long-time writer, artist and activist for women’s healthcare. She has worked as a physical therapist for 20 years, currently in home healthcare. She was diagnosed with breast cancer in 2008. Her experience of the healthcare system as a cancer patient, and as a clinician, prompted her to start a blog called The Accidental Amazon.

Breasts — A Natural and Unnatural History by Florence Williams, published by W.H.Norton, 2012.

Exhaustively researched and highly readable, science journalist Florence Williams’ latest book describes the remarkable and largely uncharted ecology of women’s breasts. Yes, ecology. Because it turns out that human breasts are in fact a complex and adaptable ecosystem, with a unique ability to tune in and respond to the world around them. But this very ability may now — in this modern world of environmental assault — be our undoing. It’s a sobering message, but Williams delivers it with humor, wit and accessible, relentless candor.

Why Do We Have Them?

Humans are almost the only mammals whose females have the pendulous, orb-shaped organs known as breasts. Most mammals do not have or need breasts to suckle their young. So, why do we?

In the book’s introduction, Williams quotes humorist Dave Barry, who once wrote, “The primary biological function of breasts is to make males stupid.” In her first chapter, she describes how apposite Barry’s observation truly is with respect to much of the research that has been conducted about them. Generations of male researchers have unwittingly demonstrated how much breasts can “make males stupid” by basing most of their scholarly studies — not to mention their informal ones — on the erroneous assumption that humans developed breasts primarily for sex appeal. Study after study set out to ‘prove’ that men liked them and to determine why, but somehow missed their rather more essential purpose, which is to feed human infants. Later studies finally acknowledged their central function — lactation — but researchers still couldn’t seem to agree on why they are shaped as they are. More recent evolutionary and anthropological studies have argued convincingly that they developed their external form and placement to help us have smaller babies with bigger brains, feed them on the run, and help infants develop the gestures, palate structure and oral motor skills necessary for human speech. Most mammals just have exterior nipples, while the milk glands remain interior. But as we stood up and lost our fur, we humans also developed flat faces. So our babies needed an exterior shape that would protrude, allowing them to latch on and suckle.

Williams proceeds to describe just how remarkable — and still poorly understood — human lactation is. We do know that lactation in animals is eons old. So far, biologists have found that we humans have about 6,000 genes devoted to lactation, and that, in essence, the primary purpose of lactation is to deliver fat-rich nutrition. Mammary glands work in highly sophisticated ways to produce milk that is individualized for each infant and confers immunity, to secrete contraceptive hormones to prevent pregnancy while mothers breast-feed, and to allow infants to develop physical and cognitive skills while they are feeding. Estrogen plays a key role in managing this remarkable process. Of necessity, breasts evolved the ability to absorb estrogen not only from other parts of our bodies, but from external sources, like the plants and animals we eat. Unfortunately, they did not develop the ability to avoid absorbing some nasty, artificial estrogen-like chemicals from our environment.

At puberty, estrogen and other hormones help girls develop the tree-like system of milk ducts that underlies the rounded structure of emerging breasts, by switching on a massive process of ductal cell proliferation. Understanding how humans start and stop this cell proliferation in puberty may lead to treatments for that other abnormal type of cell proliferation — breast cancer. 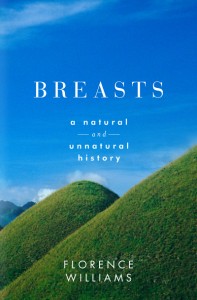 According to the research Williams cites, there is no conclusive evidence that bigger breasts gave members of our species any evolutionary advantages back in the mists of time. Bigger breasts are no better at making milk than small ones, nor do they make more of it. No matter what size they are, the average new mother produces 16 ounces of milk in each breast in 24 hours. There is also no universal, cultural consistency in the average size and shape of breasts.

Yet this notion that ‘bigger is better’ has been around for a very long time, as have all manner of external breast enhancements, from corsets to ‘cupcake’ inserts. But the idea of making breasts bigger from the inside is fairly recent. According to the American Society for Aesthetic and Plastic Surgery, in 2011, almost 317,000 women had breast augmentation surgery, making it the most popular plastic surgery among women, followed by tummy tucks (almost 150,000) and contrasted with breast reduction surgery (about 113,000). The average breast augmentation surgery results in a C cup.

However ambiguous the motives may be for increasing breast size, the history of surgical augmentation is ugly, dangerous and driven by greed. In the past century, surgeons have inserted everything from paraffin to wood chips into women’s breasts to make them bigger, usually with deadly or disfiguring results. In the late 1950′s, the first implants came along. The early ones were something like sponges, made of polyvinyl and polyethylene, and containing formaldehyde. Then came silicone, which was initially used to insulate airplane parts and lubricate machinery, and later for paints, adhesives and medical tubing. By the early 1960′s, the popularity of silicone breast implants was fostered by plastic surgeons who pathologized “limited” breast size by referring to “small” but normal breasts as “micromastia.” Even in 1982, the American Society of Plastic and Reconstructive Surgery referred to small breasts as ‘deformities.’ By the early nineties, the health problems resulting from implants, and the carcinogenic ingredients some contained, exploded across the news, resulting in lawsuits and massive recalls. Despite the so-called safer implants now produced, they continue to result in health problems like capsular contracture, while quality control and manufacturing safety continue to be questionable.

The next several chapters are even more alarming. The adaptive marvel that is the ecology of our breasts turns out to be a barometer of the environmental pollution that saturates our lives. Pesticides, plastics, and some of the chemicals used to manufacture them contain substances that are artificial estrogens. Bisphenol A, aka BPA, is one of them. Then there are drugs that act on our endocrine systems, like the infamous DES. There are artificial growth hormones and antibiotics in cows’ milk. There is mercury in our fish. There are phthalates in beauty lotions and shampoos. There are flame-retardants everywhere. The list is endless.

One of the scariest things about these substances is that we — and our breasts — absorb them even if we manage to avoid ingesting them in our food and drink. When they don’t act like estrogen, some of these substances act like aromatase, an enzyme that converts other hormones into estrogen. Others can disrupt our endocrine systems and normal genetic signaling. Our furniture, our cars, our computers, our cellphones, the predominance of our product packaging, all contain these chemicals and polycarbonates. According to Williams’ research, about “one thousand chemicals” in our everyday products have been found “to alter animal endocrine systems.” In the U.S., new products can be manufactured without testing them for their effect on the human body.

When Williams had her own breast milk analyzed by a laboratory, she was shocked to find out how much flame retardant, among other things, turned up. Later, she and her seven-year-old daughter also submitted urine samples for toxicology analysis, both before and after a three-day attempt to avoid as many potential chemicals and plastics as possible. The results demonstrated just how ubiquitous these products are and how close to impossible it is to completely eschew them.

It’s not easy to determine exact correlations between these environmental toxins and their precise effects on our biology. But research has documented that the onset of puberty in girls is occurring earlier and earlier. For decades, the average age of puberty in the U.S. had been about 13 or 14. In 1997, one study found that the mean age in American girls for breast development and pubic hair had lowered to 9.8 years in Caucasian girls, and 8.8 years in African American girls. Meanwhile, other researchers have scrambled to examine the relationship between early puberty and breast cancer risk, the carcinogenic effect of individual toxins on breast cancer development, and the relationship between all these artificial estrogens and obesity, puberty and breast cancer.

Williams goes on to a frank discussion of our conflicting notions about breast-feeding. Its history, like many other areas of our female reproductive lives, has been fraught with controversy, needless medical interference, myth, misinformation and neglect. From wet-nurses to deadly recipes for infant formula to breast pumps; from the immunity conferred by breast milk, to the toxins passed along in it, breast-feeding today can seem both miraculous and dangerous. Breast milk as a substance is still far from thoroughly understood. And few scientists comprehend the mechanism by which we produce it. Nor does it always come ‘naturally.’ Not every woman can or wants to breast feed, and thousands of children, at least in modern times, have managed to grow up to be healthy adults without it. Baby formula, however, has its own unseemly history. But as researchers understand more about real breast milk, we may be able not only to produce better, safer infant formula, but develop some of its ingredients to help fight cancer.

The last chapters in the book address the myriad vagaries of breast cancer. A particularly moving chapter addresses male breast cancer, and the cluster uncovered among Marines at Camp Lejeune, “the largest cluster of male breast cancer ever identified.” Other chapters are devoted to HRT, aging, and breast cancer incidence; to breast density, BRCA mutations, and the drawbacks of current screening tools. There is even an edifying revisit with formal breast self-exams, in which the author used a scientifically-engineered breast-model, with instructions that are very different from the old shower-card instructions with which many of us are familiar. Even with practice, Williams did not find it easy or necessarily helpful. But once again, the bottom line seems to be that, however we do it, we should spend some time getting to know our own breast geography.

The overriding theme of this informative book is to place human breasts in their evolutionary, ecological, social and biological context. And to outline an urgent call to action. The more we understand breasts, in all their complexity, the more we realize that the task of curing and preventing breast cancer has reverberations that affect all of society.

Yet, Williams writes, even when prevention is “broadly defined to include early screening,” [a definition BCAction disagrees with, as screening does not prevent the development of cancer] only 7% of the National Cancer Institute’s budget is spent on prevention. Our basic screening tool — mammography — has not changed in its essence in over half a century, while radiation, which mammography confers upon our breast tissue, itself is the one absolutely proven environmental factor that increases our risk of breast cancer.

Meanwhile, despite the fact that the bulk of the NCI’s budget is spent on treatment research, the treatment of breast cancer still involves the old ‘slash/burn/poison’ protocol, with all its collateral damage. As the author discovered personally, better lifestyle choices can only take us so far. Until manufacturers make safer products, until corporate farms produce foods that are free of toxins, until the assessment and regulation of chemicals is more rigorous, we are all at risk.