Put Down the Pink, and Pick Up Your Pen! 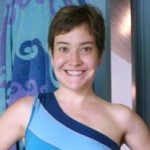 Ah, October. The month I, and most other breast cancer survivors I know, dread. Why can’t October be about beautiful foliage, pumpkins, and cozy sweaters in the crisp, autumn air? Why does October have to be a time when we’re all drowning in a sea of pink ribbons?

There are multiple things that bother me about Breast Cancer Awareness Month. One is that not only are we supposed to think that shopping is the best way to fight breast cancer (it’s really not), but many of the pink ribbon products actually contain chemicals that could give us cancer. What?!

This week, I came across a magazine ad for Procter & Gamble’s pink ribbon products, with fine print that clarifies that Procter & Gamble is donating either one cent or two cents to the National Breast Cancer Foundation per product purchased. That got me wondering, how do they determine which product is a “one cent product,” and which product is a “two cent” one? Ooh, ooh, I know!! Maybe the Procter & Gamble products with known carcinogenic or endocrine-disrupting chemicals are worthy of two cents being donated to the fight against breast cancer, whereas for the ones which haven’t been tested for carcinogenic chemicals and therefore can’t be considered dangerous, eh, one cent will suffice.

Procter & Gamble, like many other companies, is hoping we’ll be so blinded by the pink ribbon on the package – oh, how nice, people care about breast cancer, and are trying to help! – that we forget about the fact that the company sells products with known or suspected carcinogens in them. It’s incredibly insulting.

Buying pink ribbon products with known carcinogens in them is not going to stop the breast cancer epidemic, and indeed contributes to it. So what’s the solution? Many people say the solution is for everyone to instead only buy natural, carcinogen-free products. There are numerous articles and websites and books about how to do this. Buying safe food and products is important, and in an ideal world, we would all do this.

But “Vote with your wallet!” is a classist statement. Many people don’t have the time or money to do so –for example, an organic queen mattress and box spring costs nearly $3,000. And every human being deserves clean, healthy air, water, food, buildings, and products, not just the elite few who can afford it. What’s more, even people who have enough money to ensure that everything that touches or enters their body or home is free of toxins are not immune to the plethora of toxic chemicals we’re all exposed to every time we step foot into the public sphere.

This is why shopping is not the best way to address the breast cancer epidemic. Insisting that it’s up to each of us to be smart shoppers, and not saying a word about the responsibility of the companies to create and sell safe products, or the responsibility of our government to regulate the chemicals, means letting the corporations and government off the hook. Safe grocery shopping should not require a chemistry degree and two hours in the store reading labels. All food sold in food stores should be safe to eat. Enough shopping! It’s time to raise our voices. Badger the hell out of your elected officials to pass the Safe Chemicals Act, so we are all protected; to label and study the hell out of GMO foods, banning if definitively found to cause cancer; to just say NO to cancer-causing fracking; to increase green energy and reduce our dependence on cancer-causing fossil fuels. Demand that your elected officials do their jobs to protect human health and need, not corporate greed.

There are plenty of organizations online that have ways for you to get involved – petitions to sign, pre-written emails to forward along – and these actions are quick and easy. Breast Cancer Action’s campaign this month seeks to get elected officials to publicly endorse the 2012 Breast Cancer Action Mandate for Government Action, which asks elected officials to go beyond just wearing a pink ribbon and commit to real action. Action includes initiating and supporting independent, government funded research; and strongly regulating carcinogenic chemicals.

Emailing this letter to your elected officials is a great idea and a launching pad to go even further – put your heart into it and personalize it. Scribble a “BAN GMOs NOW! Love, a cancer survivor who wants to grow old” postcard to the president every Saturday afternoon. Put your Senator on speed dial, and every time you’re out walking the dog, bring your cell phone, and leave your Senator a message asking them to support strong chemical regulation. 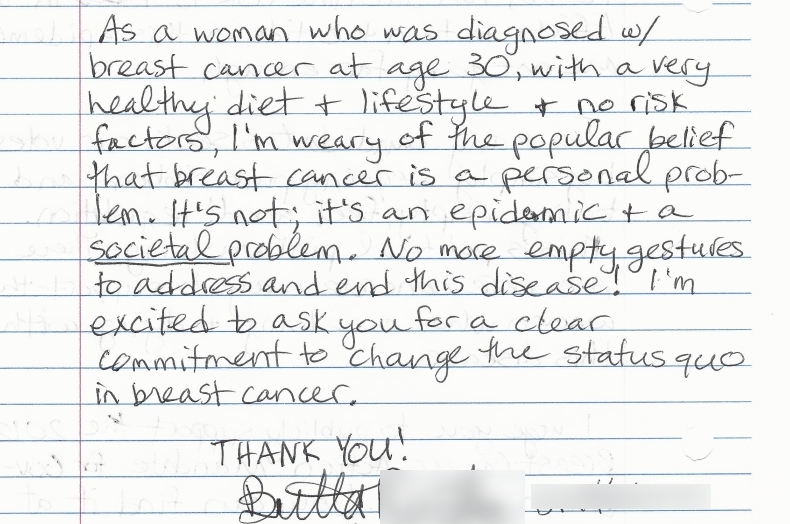 Britta wrote to her Senator, Bernie Sanders, asking him to take endorse our Mandate for Government Action.

We can do this. The first step is believing that we can. If you’re worried that your one little letter won’t make enough of a difference, so why bother, consider that Campbell’s received over 70,000 letters demanding that the company cease its use of BPA, and those 70,000 people won. Industry totally loves it when we blame ourselves for our “bad shopping choices” or the “mistakes” we feel led to us being diagnosed with cancer. Our self-blame is of enormous benefit to those who poison us.

When Women’s Voices for the Earth exposed the fact that Tide detergent contains the carcinogen dioxane, Procter & Gamble’s response basically amounted to, “Oh, c’mon, the amount of dioxane in Tide is soooo tiny, it doesn’t even matter!” If there was really a person whose only exposure to carcinogens was the occasional load of laundry in Tide detergent, I’d concede Procter & Gamble’s point. What they and all the other companies selling products with carcinogenic chemicals are not acknowledging (at least publically) is the accumulation and interactions of the many carcinogens we are all exposed to every day against our will and without our knowledge. But we need to see the bigger picture – see all of the chemical exposures put together as a whole, and see all of our voices put together as a whole. If you were the only one writing a letter saying, hey, Campbell’s, get the BPA out of my soup, Campbell’s could ignore you. But you could be one person with 69,999 other standing in solidarity with you.

Next week, I’m screening the film “Living Downstream” in my living room two days in a row – it’s the story of ecologist and cancer survivor Dr. Sandra Steingraber’s work to educate the public about environmental carcinogens and advocate for their abolition, directed by Chanda Chevannes. Most people who watch this film respond with, “What can we do?”, so a week later, I’m starting a once-a-month activist letter-writing group. We will meet downtown at a tea shop that sells delicious organic tea and baked goods, and together write letters about whatever is in our hearts, whether that means writing thank you notes to local, organic farmers; letters to the editor to share what we’ve learned about chemical exposures; one-liner postcards to the president; or multi-page letters to companies that sell a product we’ve been using for years and just discovered is harmful to our health. The possibilities are endless, and I’m excited that the first group of friends I invited to join me responded with enthusiasm. We will simultaneously be supporting an awesome local business and its organic products, enjoying each other’s company and some time away from our electronic devices to kick it old-school with pens and paper, and using the power of our pens to advocate for a healthy world. You could start a group like this in your community, too. Together, we are strong and cannot be ignored.