We Stand with Dr. Tyrone Hayes 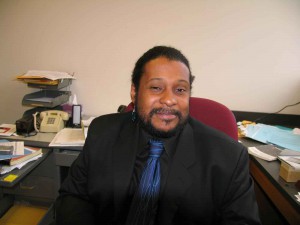 Dr. Tyrone Hayes has studied and spoken out about the impact of the pesticide atrazine on animal and human health. This photo was taken at an interview we did with him in 2008. Photo by Brenda Salgado.

Dr. Tyrone Hayes, a biology professor  and researcher at UC Berkeley, has done pioneering and vital work exposing the impact of endocrine disruptors on animal and human health. Specifically, his work investigating the impact of the widely used pesticide atrazine has been crucial in our understanding of the dangers of endocrine-disrupting pesticides. Endocrine disruptors have known links to breast cancer.

We are deeply grateful to Dr. Hayes for his work and for speaking out for the last 15 years even when Syngenta, the multinational corporation that makes atrazine, tried to silence him. We are infuriated to read in this damning New Yorker piece the lengths to which Syngenta went in order to discredit, silence, and isolate Dr. Hayes.

While we are not surprised, it’s chilling to read the depth and breadth of Syngenta’s campaign against Dr. Hayes’ work and character. Their tactics have been, to say the least, despicable, including using his class background and the fact that he is a black man, one of the very few tenured black biology professors in this country, to undermine his credibility.

We have never been, and will not, be duped by industry spin. We understand, as this New Yorker article shows, how the deck is absolutely stacked against us when it comes to regulating toxic chemicals in this country. The chemical industry has tied the hands of regulators, bought off Congress, and paid lavishly for scientific spin doctors to rail against credible evidence of toxic harm done by chemicals like atrazine, which has contaminated drinking water and caused birth defects across the U.S.

Without dedicated scientists like Dr. Hayes, we would know far less about the impact of toxic chemicals on our health. We thank him for his pioneering work and his refusal to stay silent, even in the face of a billion-dollar industry set on destroying his career. We cannot be bought. We refuse to be cowed. And we stand with Dr. Tyrone Hayes.