Editor’s Note: Ryan and Chris Haigh are brothers who launched a fundraising campaign this year that raised over $30,000 for Breast Cancer Action. We are so grateful for their generosity and the generosity of their community. Sarah Harding, our Development Director, asked Ryan and Chris about the campaign and what inspired them. 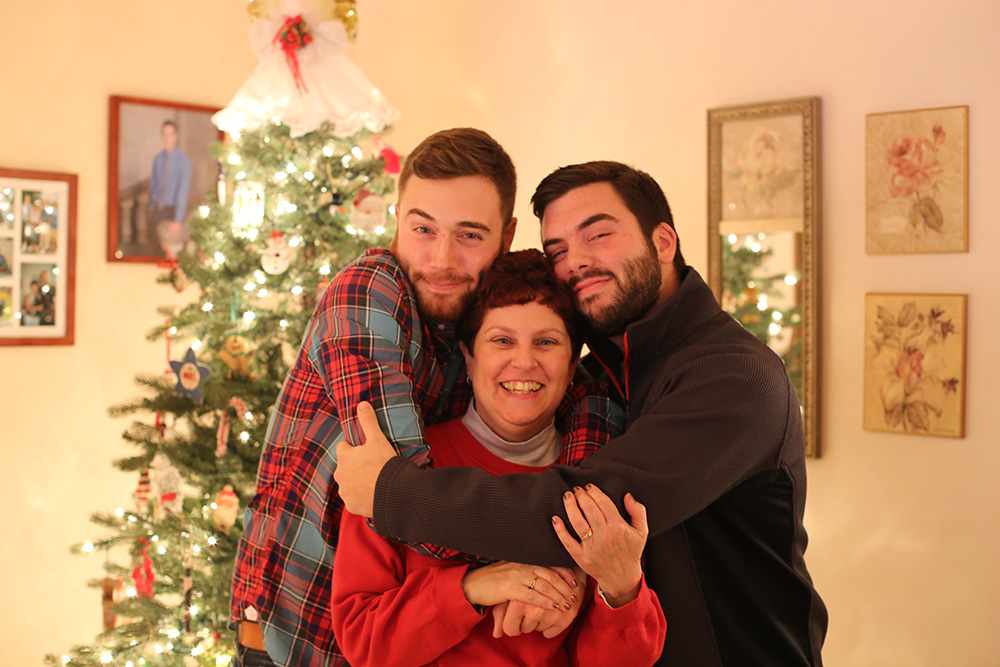 Ryan (left) and Chris Haigh with their mom.

SH: What was your inspiration for the “Beards for Boobs” campaign?

Chris: Our mom has the BRCA gene mutation. When she found out about her diagnosis, she planned to have a prophylactic mastectomy. During that time, she was diagnosed with breast cancer.

Ryan: My brother and I were tested for the gene mutation as well and Chris tested positively. We have a large Italian family and we are really close and cancer has affected so many of our family members. We were tired of having people we love taken away from us and tired of just talking about cancer. We wanted to do something that showed how much we appreciated our mother and her strength.

As we thought of ways to take action, I was reminded of a fun family memory. When I was little my dad grew a beard. I loved it and thought it was so rugged. For fun a few years ago, my brother Chris and I decided to have a three-month long “beard-off” with our dad. The camaraderie and friendly competition that my brother and I felt during this beard-off with our dad gave me the idea for doing a beard-off with our closest friends to raise money for a breast cancer organization doing good work.

SH: Can you tell us about your fundraising campaign?

Ryan: Chris and I began by reaching out to 65 of our closest friends to ask if they would participate in a two-month long beard-off to raise money for breast cancer. Everyone starts out with clean-shaven baby faces, which creates conversation in itself that lends nicely to starting a conversation about why we are doing it. It gives it a fun aspect. Each participant was asked to grow their beard for the entire two months. During this time, people reached out to family and friends to ask them to support them by making a donation to Breast Cancer Action. At the end of the two months, we had an event to celebrate and show off our beards.

Ryan: We didn’t think it would be as successful as it was. We raised over $30,000 for BCAction! We were amazed at how many people got involved. We really appreciate our friends but we never expected so many of them to come together and work together in this way.

Chris: I had people walking up to me at work to tell me how they were personally affected by breast cancer. I didn’t know how many people I knew were affected. It gave the whole thing a purpose. It excited me to be part of something bigger than myself.

SH: What inspires you about the work of Breast Cancer Action?

Ryan and Chris: We looked around quite a bit to find the right breast cancer organization and we were very selective about which organization we approached. The Pink Ribbons, Inc. documentary was a huge part of what inspired us to choose Breast Cancer Action. We felt it shined such a light on the issue. We wanted to support an organization that approaches the breast cancer epidemic differently than mainstream organizations.

Ryan: There are so many negative views on breast cancer fundraising. Some people tell me that they didn’t want to support our campaign because they felt breast cancer is over-funded. I think they feel this way because many organizations aren’t approaching the disease as an epidemic. Until I saw the documentary, I had no idea that this was happening. Breast Cancer Action’s former executive director Barbara Brenner was amazing in the film and I wanted to support her vision and the work BCAction is doing. We like that BCAction is doing it differently. You have our full support moving forward.

SH: How did you come up with the name – Beards for Boobs?

Ryan: Chris’ co-worker came up with the name. The name is a sensitive point because we don’t want people to think we are making a joke of the disease. Seeing what our mother went through was not a funny thing. I asked my mom and she asked her support group for their opinions on the name of our campaign and they supported it. The name has not offended people but people have questioned it.

Chris: The upside to the name is that there is alliteration and it speaks to the goofy nature of the 65 guys who are involved and helped make it successful but we want to be smart about it going into year two.

SH: Do you have plans for the future?

Ryan and Chris: Yes! We now have time to plan for next year so we are energized and want to blow this year’s campaign out of the water. The first year was just the beginning. We only tapped into 10 percent of our resources. The possibilities are limitless.