Book Review: My Soul is Among Lions: Pages from the Breast Cancer Archives 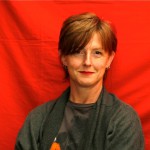 I have to begin with a disclaimer. Or two. Reading a book with a picture of former BCAction Executive Director Barbara Brenner front and center on the cover is obviously going to get my attention. And when the author happens to be a woman who has spent most of her life thinking, writing and speaking out about injustices in breast cancer, not to mention been a frequent contributor to The Source, I’m probably going to be a little biased in my review of the book. But even taking all that into account, when a book comes across your desk with the title My Soul is Among Lions, chances are it’s going to be good. And this one did not disappoint. 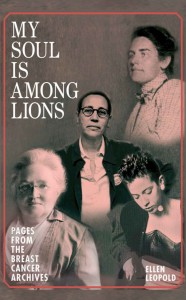 Ellen Leopold’s book My Soul is Among Lions: Pages from the Breast Cancer Archives (Valley Green Press, 2014) is remarkable. Not in the way a full moon is worth a mention but in the way small stars visible on a cloudless night cause you to pause and remember that there’s so much more to the sky than the thing that’s brightest, shiniest, and most visible. This book brings together many of Leopold’s essays and, combined in this collection, they reveal a history of personal and cultural narratives that show how women, including Leopold herself, have intervened in the course of this disease: some publicly, some privately, some written out of history, some by writing the history themselves, and some, thanks to Leopold’s book, now written back into history. This book celebrates “agents of change:” the women who have made a difference.

So of course, Barbara Brenner is among them.

There are a number of things I love about this book, not least of which is how beautifully it’s written and how effortlessly it reads. Like a book of short stories, you can pick and chose between the chapters or read them one after the other. The book begins with an introduction that plots a history of women’s intervention into the breast cancer epidemic, beginning with Leopold’s own involvement with grassroots breast cancer activism at the Women’s Community Cancer Project. Over 20 years ago, Leopold co-authored an article about obstacles facing low-income women diagnosed with breast cancer for the leading feminist newspaper Sojourner. After the introduction, Leopold then takes a step back to draw from the archives of women writing about breast cancer.

What emerges are a range of formats seized upon by women to talk about their experiences with the disease, many of them not obvious (or available) to the public eye: letters written privately between women because there was no public forum for women to speak out about breast cancer, let alone mention a disease so closely associated with such a highly sexualized body part; this same content then shared among a small community; and, legitimizing years later, the published memoirs and diaries of “celebrities” living with breast cancer. Doctors, researchers, artists, activists, academics all who have played a role, some of them in the margins—albeit the white, educated, middle class margins—but who unequivocally have made a difference in the course of how we understand this disease and by extension, provoke us to ask “how can we do more?”

There were moments early on when I became infuriated that time has not more speedily moved us past much of what faced our predecessors. Leopold writes that in the early 1900s when breast cancer did surface in print “the disease was often traced to ‘inappropriate’ behavior’ on the part of the hapless female victim—too much dancing, exercising, or thinking were often cited” (7). Today, we still see that burden of responsibility put on women to not get breast cancer: eat better, exercise more, breastfeed, buy only organic/pesticide-free/chemical-free personal care products. This absolutely unacceptable message is the same: if you get this disease, it’s your responsibility.

My favorite section is Leopold’s reading of obituaries, which for years failed to include the deaths of women. I was shocked to read that the death of breast cancer activist Rose Kushner as late as 1990 marked the first use of the words “breast cancer” in the boldface heading of an obituary (134). When women died of breast cancer, the disease was typically “air-brushed out.”

And yet in the face of all of this denial and ignorance, in the face of all the limitations, paternalism and discrimination, Leopold’s book reminds us that there are women who for years have been caught up in the struggle with this disease, and who have expressed “an attitude towards the sacrifice of [their] own life that has, bit by bit, moved us forward” (138). I love Leopold’s unapologetic work to write these women back into history, for they are women whose lives and work significantly changed or challenged the course of this breast cancer epidemic.

And I appreciated Leopold’s candor in naming those who, in her estimation and in mine, have not done enough. Those large, mainstream corporate charities who walk the path of least resistance by mirroring the mainstream cancer establishment’s “reluctance to get involved” when it comes to providing real services to low-income women and will pay generously for “everything but surgery, radiation and chemotherapy. . . . and treatment for those who cannot afford it . . . but nothing that could be construed as breaking the American taboo on ‘socialized medicine’ ” (151-2).

Cheers to Ellen Leopold and to the heroines of her book. Cheers to Katherine Coman and Katherine Lee Bates, to Jane Elizabeth Lane-Claypon, Kathy Acker, and Samantha King. And, of course, in my humble opinion, the lion among them all, Barbara Brenner.

In addition to the excellent book reviewed above, we asked members, staff, and our Board of Directors to recommend good reads about breast cancer, women’s health, and healthcare in general. We’ve compiled a summer reading list below based on their recommendations.

P.S. We love and support independent bookstores. However, if you do buy any of these books on Amazon, when you use Amazon Smile a portion of your purchase will be donated to BCAction.

If you’re interested in breast cancer and the environment:

If you’re interested in pink ribbon marketing and the politics of breast cancer:

For a dose of humor:

And here are some books that don’t easily fit into a category but are darn good reads: