Rally Against Pinkwashing in Pittsburgh – 10/26 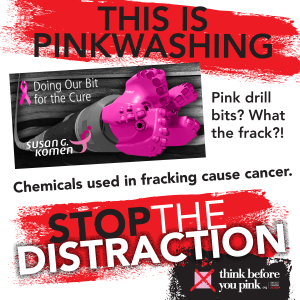 I’m headed to Pittsburgh this weekend. Can you join me to take a stand against pinkwashing?

On Sunday, October 26, fracking giant Baker Hughes will present a $100,000 check to Nancy Brinker, Komen’s founder and figurehead, at the Pittsburgh Steelers football game. I’ll be outside the stadium, rallying alongside other anti-fracking and health activists to demand Komen break their relationship with fracking companies like Baker Hughes and take a stand against this toxic process.

Event Details:
When: Sunday, October 26th at 2pm – 4pm ET
Where: Meet at North Shore Riverfront Park at the Fred Rogers Memorial Statue.
What to Expect: This will be an organized rally and action, which will include the following speakers representing leading anti-fracking and women’s health organizations:

What to Bring: We are encouraging people to wear something red. And bring signs, banners and friends!
RSVP: Please let us know you’re coming by emailing Annie Sartor at asartor@bcaction.org.

Background Information: The world’s largest breast cancer charity has joined together with one of the world’s largest fracking companies: the Susan G. Komen Foundation is partnering with Baker Hughes, a leading global fracking corporation. Baker Hughes is distributing 1,000 pink drill bits, and donating $100,000 “for the cure” to Komen. This “Doing Our Bit for the Cure” partnership is pinkwashing. Fracking is a toxic process – at least 25% of the more than 700 chemicals used in fracking are linked to cancer.

This pinkwashing partnership makes Komen complicit in a practice that endangers women’s health. Komen and Baker Hughes have created a perfect profit cycle whereby Komen raises millions each year to try to cure a disease its funders are helping to cause. This is unacceptable. Over 150,000 people have already signed a petition to Komen demanding they break ties with the fracking industry and take a stand against this toxic process. Our health is not for sale, and we’ll be saying so loud and clear in Pittsburgh this weekend. I hope you can join me.