Together, over the years, we’ve changed the landscape of pink ribbon marketing. Pinkwashing is now a household word. People understand that you always have to “follow the money” in pink ribbon marketing. We’ve exposed the hypocrisy in pink ribbon fundraising and achieved some momentous wins against corporations. Even Consumer Reports magazine said this October that “the message of ‘think before you pink’ has gotten out.” And this year’s Think Before You Pink campaign generated the largest grassroots opposition to pinkwashing ever. Together, we are turning the tide and we couldn’t have done it without you. In four short weeks, here’s a glimpse of the impact we’ve made: 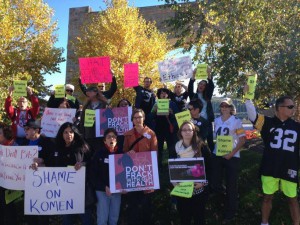 Activists rally against the pinkwashing partnership between Susan G. Komen and Baker Hughes.

This October, our outrage and our work together created the largest grassroots opposition to pinkwashing ever. During a month when all too often the distraction of pink stops the world from focusing on the important issues in breast cancer, this year our collective action and the increased media attention shone a spotlight on the specific ways pink ribbon campaigns misinform, distract, demean, exploit, and harm women. And by calling out Komen’s fracking partnership, we made absolutely clear where this giant breast cancer charity stands when it comes to protecting women’s health and widely publicized the health harms of fracking. Thank you so much – none of this is possible without your support.

Printer friendly
Share this:
This entry was posted in Articles, BCA News, E-Alerts.