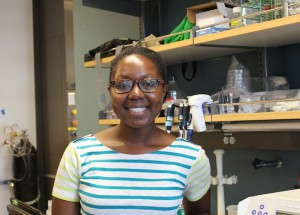 Thursday’s general session at the 2014 San Antonio Breast Cancer Symposium (SABCS) kicked off with a plenary lecture from Dr. Alana Welm of the Oklahoma Medical Research Foundation on the use of patient-derived xenograft (PDX) models in mice as pre-clinical (or co-clinical) models of metastasis.

With this experimental tool, researchers are able to take a piece of a tumor directly from a patient and establish unique models of the tumor in the mammary fat pads of mice. Dr. Welm suggests that engraftment of a patient’s tumor (or, the ability of the mouse to continue growing the tumor after it’s put in) may correlate with poor outcome in a particular patient. Approximately 30% of tumors are able to make the rocky transition from human to mouse. Further, the patterns of metastasis in the mouse models (i.e., the locations they spread to) closely resemble the sites of metastasis found in the original patients. Could the tumors that successfully engraft and spread in mice help identify the bona fide “bad guys” (or genes) driving the primary tumor’s ability to metastasize to specific organs?

In a specific case study presented in the talk, researchers established a PDX model with a tumor from a woman with Stage IV metastatic cancer. Her tumor was identified as ER, PR, and HER2-negative (i.e. triple negative). Researchers initially saw a specific response to paclitaxel in the PDX model that mirrored the patient’s significant response to treatment. In contrast, PDX models showed no response to doxorubicin, which forecasted the patient’s eventual lack of response after modifying her treatment regimen.

Tumors are also known to evolve with engraftment in mice, and Welm’s group took advantage of this biological phenomenon to study the eventual resistance to paclitaxel in their PDX model compared to the resistance that developed in the original patient with metastatic disease. In their experiment, they compared the portion of mice with taxol-resistant tumors to a sample obtained from the patient after developing resistance. About half of the genetic changes occurring in the patient were also found in the mice with resistant tumors, suggesting that PDX models could function as pre-clinical or co-clinical models of therapeutic resistance.

As a scientist, this use of PDX mouse models as an experimental tool to investigate tumor progression is extremely promising for researchers to have direct clinical relevance in the laboratory. Much of the currently published literature in breast cancer is based on data from cell lines or spontaneous mammary tumors from mice. These limited models often oversimplify the complex, context-specific nature of breast cancer. Further, some cell lines commonly used in studies of breast cancer are known to be misidentified and are likely representative of other cancers.The prospect of shifting to more accurate models through direct access to patient samples in early experiments should move the field of biomedical research toward more actionable results from preclinical data.

Welm addressed the limitations of patient-derived xenografts as a model system, noting the differences between the immune systems in humans and mice. Currently, the majority of PDX models are established in immunocompromised mice. This experimental design prevents the careful examination of the role of the immune system in tumor biology. She also cautioned that patient-derived xenografts are unlikely to shape individual treatment regimens, due to the length of time it takes to establish these models in relation to the necessarily dynamic nature of ongoing treatment in patients.

Members of Welm’s lab are now working to “humanize” the immune system in these mouse models, which may allow researchers to more accurately study the effect of drugs with a known immune component (e.g., Herceptin) on tumors obtained directly from patients. Though imperfect, the emerging science behind PDX models allows researchers to carefully dissect the molecular mechanisms underlying metastasis and therapeutic resistance. This modern experimental approach has promise in facilitating scientists’ ability to drive new therapeutic strategies with evidence based directly on the evolving nature of breast cancer.