“Barbara Brenner Was the Love of My Life” 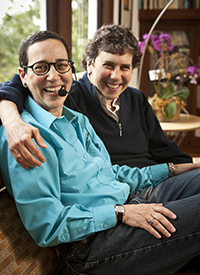 Barbara Brenner was my partner for 38 years, and the love of my life. She was also Breast Cancer Action’s executive director for over 15 years. In fact, she was BCAction’s first full-time employee. Under Barbara’s leadership, the organization grew into a national powerhouse to be reckoned with, taking on the cancer industry like no other organization. Barbara defined BCAction’s persona and voice: fearless, smart, fierce, unapologetic, and, at the same time, compassionate. If you knew Barbara, you know exactly what I mean.

Barbara died in 2013 and my world hasn’t been quite the same without her. I so wish she could be here with us to honor Breast Cancer Action’s 25th anniversary on October 8. She would have loved to celebrate everything that the organization has accomplished over these years—and to rally with us for the work that’s still ahead. I know she would be proud that Dr. Sandra Steingraber, acclaimed environmental activist and friend, will receive the first ever Barbara Brenner Hell Raiser Award at the 25th anniversary event. Barbara was a hell-raiser of the first order, and Sandra is the same: she epitomizes those fierce and tenacious qualities that propelled Barbara through her journey as a health activist and game-changer.