Susan Claymon: “Some of Us are Angry and We’re Doing Something” 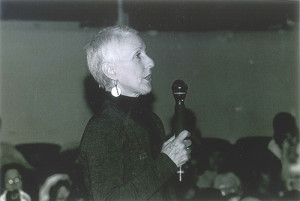 By Deborah Claymon, daughter of Breast Cancer Action co-founder Susan Claymon. Deborah will be attending BCAction’s 25th celebration on October 8th and hopes you can join her.

Breast Cancer Action was founded in the era of the answering machine, and on any given evening, Susan Claymon’s tape was always full. Somehow they got her number. Hundreds of women would call my mother, and no matter how drained or drowsy, she’d spend hours on the phone trying to help.

In the early days, my mom – like BCAction’s other founders – was an unofficial hotline for information. The group grew out of a medical support group and always kept that at its heart. At first my mom didn’t think she knew much. She just wanted to offer her time and her solidarity. She’d listen to the diagnoses, the prognoses, the sobs and the rants. They sounded like her own.

When my mom had been diagnosed with aggressive breast cancer in Cincinnati a few years earlier, she’d had no one to call. She wore a wig to her job and endured Adriamycin before Zofran in isolation. It wasn’t until she fulfilled her dream of moving to San Francisco – almost immediately confronting the 1989 earthquake and bone metastasis – did she find a community through Breast Cancer Action.

Before there was the BCAction newsletter, before the Internet or email or blogs, my mom would spread the word, one mother/sister/daughter/friend phone call at a time. Learn everything you can, she’d say. Question your doctor. Befriend the nurses, the radiology techs.

She’d share that early BCAction spiritual fuel: “Some of us are angry and we’re doing something.” We’re making noise – and we want answers. Talking to women on the other end of the line wasn’t just for them; this community of callers kept her going, too. It led her to become the first breast cancer activist to address the President’s Cancer Panel in Washington, D.C. It also pushed her to draft and pass the California Breast Cancer Act of 1993 and serve as a peer reviewer for the national Department of Defense Breast Cancer Research Program.

This was my mom’s second shift, but she called it her real work. She fought to keep BCAction going when it could have fallen apart. And she was a one-woman hotline, late into the night, for years. She’d listen to Peoria and New York; she’d return calls from Oakland, San Diego and Cincinnati.

In late 1999, when my mom would only live a few more months, the phone calls kept coming. We set up a separate voicemail account that she could check when she had the energy. The phone just rang too much.