Why These Patient Advocates Oppose Confirmation of FDA Nominee 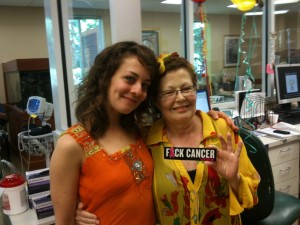 Marie Garlock and her mother, Barbara

Editor’s note: The U.S. Senate is, unfortunately, poised to confirm Dr. Robert Califf as the new head of the Food & Drug Administration (FDA). Last month we wrote the to the Senate HELP ((Health, Education, Labor and Pensions) committee, stating our strong opposition to his nomination. We wanted to also share with you this powerful letter written by one of our Community Leaders for Change, Marie Garlock, and Linda Radach, an advocate with National Center for Health Research and the Patient Safety Action Network.

It has come to my attention that despite HOLDS placed on the Senate confirmation of Dr. Robert Califf as FDA Commissioner, a Senate cloture vote has been scheduled for this evening. I write to you with a sense of profound urgency, as a lifelong North Carolinian and constituent of Sen. Burr’s, to request that this vote be delayed according to proper procedure, and reconsidered as a “NO” vote, given the problematic record of Dr. Califf. I also write as a patient caregiver to a mom, Barbara Garlock, J.D., who was harmed by poorly regulated and poorly tested chemotherapy drugs Avastin (appendix rupture) and Gemzar (death from visceral failure of liver at just 53 in 2013). I am also writing as a Community Leader of 400+ Breast Cancer Action members in North Carolina, and a trained member of the Patient Advocacy Network of the National Center for Health Research, representing scores of patient and caregiver voices from across the country.

From start to finish, this has been a deeply disturbing process: the senators who placed BLOCKS on a Califf vote have done so not out of political spite, but out of dire concerns over Dr. Califf’s ability to provide the leadership FDA needs to protect the health and safety, and accountably measure the effectiveness (not merely the private profitability) of drugs and devices for the American people.

The New York Times stated, “Califf has ‘deeper ties to the pharmaceutical industry than any FDA commissioner in recent memory.’” Is the new job description of the FDA commissioner to systematically remove safety standards for drugs and medical devices? Hanging in the balance are the lives of countless families facing cancer, as people reliant on ethical regulations for drugs and devices that will either extend and improve cancer patients’ quality of life, or irreparably harm patients, and even cause premature death.

The threats to patient health represented by Dr. Califf’s historical ties to the pharmaceutical industry are remarkable–as are the depth and length of his various industry relationships. Dr. Califf claims he would never lower FDA standards, but the evidence from his years at Duke Clinical Research Institute tells a very different story. These are the additional concerns which were not addressed during the HELP Committee nomination and confirmation hearings. The research shows that Dr. Califf will not be able to stand up to industry pressure and provide the strong leadership that can reform the FDA.

3) … a study led by Dr. Califf for the drug Xarelto came under sharp criticism by the FDA as having a built-in bias in favor of this new, much more expensive blood thinner. Though eventually approved, Xarelto is now the subject of mass litigation for causing untold damage and even death.

4) … Dr. Califf has said that he will not lower FDA standards, and yet a recent New York Times editorial states that “In 2014, Dr. Califf gave a speech to researchers, lawyers and industry experts in which he described regulation as a “barrier” to biomedical innovation. He also helped author a series of papers which were critical of the FDA, and then had his name removed from those papers around the time he was nominated for the Commissioner position.”  Dr. Califf has recently come under scrutiny for providing the Senate HELP Committee members with questionable answers.

If the Senate confirms Dr. Califf, patients and safety advocates across this nation are concerned he will endanger patient safety and further gut the integrity of the FDA review process. From all members of the grassroots patient advocacy network, of the National Center for Health Research and the Patient Safety Action Network we repeat: “We need a commissioner who will stand on the high ground of providing reasonable assurance of the safety and efficacy of our drugs and devices through the gold standard of controlled, double-blind, human clinical studies. Dr. Califf is not that man! Therefore, we, and countless Americans now call on the Senate to prioritize the real patient voice above industry groups, put the integrity of the scientific process above profits, and decline to confirm the nomination of Dr. Robert Califf as Commissioner of the FDA.”

The FDA regulates nearly 25 cents of every dollar spent in the U.S. Where monetary value has been put at odds with human life, where the claim of “innovation” has been pitted against the promise of patient safety and well-being, we call for a different leader than Dr. Califf. We call for a leader who will have the ability to stand up to industry pressures placed on the FDA  by prioritizing product safety and efficacy, and inclusion of race- and gender-diverse testing measures to track differential health effects of drugs and devices. The FDA needs a leader who will be focused on patient-centered health policy–not private industry profit paid for by the rest of us. On behalf of all those who have lost their lives or their loved ones, their mobility or their physical functions as a result of “fast-tracked” and under-tested drugs and medical devices, we request an FDA leader who will make better choices than Dr. Califf has or can–and a Senate who hears and honors its constituents first.