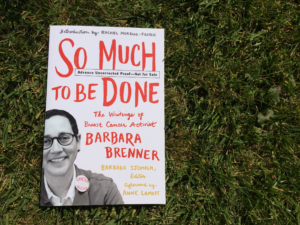 Barbara Brenner became the first full time Executive Director of Breast Cancer Action in 1995 and led the organization for 15 years. During this time, she regularly wrote with moxie and wit about the inequities and hypocrisy of what she called “the breast cancer industry,” and her columns were a much loved feature of this newsletter.

In 2010, when she was diagnosed with amyotrophic lateral sclerosis (ALS), she broadened her critique of healthcare to include her experience with ALS posting regularly to her blog Healthy Barbs. In her last post, written 5 days before her death in May 2013, Barbara wrote “This blog will be up for a while — and some ambitious person may turn it into a book.”

“So Much To Be Done: The Writings of Breast Cancer Activist Barbara Brenner”, edited by Barbara Sjoholm, was published by the University of Minnesota Press in May 2016.

We are proud to share with you this excerpt from the Introduction and hope you will be moved to order a copy of your own. The book can be purchased here and is available also at select bookstores nationwide. If your local bookstore doesn’t stock it, tell them to order it.

Thanks to the generosity of Barbara’s longtime partner Susie Lampert, profits from the sale of this book will benefit Breast Cancer Action.

I first met Barbara Brenner in the late 1980s, when, fresh out of college, I began working for Equal Rights Advocates, a women’s rights law firm in San Francisco. The organization was located in a building filled with other civil rights groups, including the American Civil Liberties Union of Northern California, where Barbara served as a board member and prolific fund- raiser. . . .

In the late summer of 1993, when I was twenty- eight years old and about to start a doctoral program in environmental health sciences, I was diagnosed with breast cancer. Within a week of my diagnosis, Barbara herself found out that she too had the disease. She was forty-one at the time. During that fateful week, my political mentor became my “bosomless buddy” as we joined the dreaded sisterhood of breast cancer and embarked on treatment regimens commonly described as “slash, burn, and poison.” During that year, we shared a lot about grueling breast cancer treatments and their side effects (hair days versus no hair days), feeling underwhelmed about breast cancer support groups and breast cancer organizations that promoted “breast cancer awareness,” and coming to terms with the reality that our time on this planet is short and that we had better get on with “living lives that matter,” as Barbara liked to say.

Shortly thereafter, in 1994, Barbara got involved with Breast Cancer Action as a board member. By the fall of 1995 she had become the organization’s first full- time executive director. . . .  Under Barbara’s leadership, BCA [now BCAction] would grow from a feisty band of activists to a formidable organization with national clout and thousands of members.

BCA has its roots in the feminist women’s health movements of the 1960s and 70s [that] politically engaged women to address their systemic exclusion from medical education and health care policymaking.  Influenced by this movement history, BCA (not surprisingly) quickly distinguished itself as an organization that views breast cancer as public health and social justice issues and seeks to end the breast cancer epidemic through organizing, outreach, and collective action . . . As executive director, Barbara refined BCA’s approach to organizing and action, in order to transform public perception of breast cancer from an individual disease, to be dealt with privately, to a politicized and collective illness experience requiring systemic social and policy change. As BCA grew, its radical and passionate form of political activism contrasted sharply with the traditional non-confrontational tactics of the mainstream breast cancer movement; this orientation led some observers to dub the organization the “bad girls of breast cancer”— a characterization that Barbara embraced by putting the slogan on a BCA T- shirt.

. . . BCA’s founders, along with leaders of other breast cancer advocacy groups that emerged during the same period across the country, were frustrated by the lack of scientific evidence on breast cancer etiology. Women wanted to expand scientific inquiry on breast cancer causation beyond a perennial focus on individual and behavioral risk factors (such as genetics, reproductive history, diet, exercise, and other so- called lifestyle factors), which had thus far yielded equivocal results, to include potential environmental links; the latter was of particular interest to women who were concerned about high breast cancer rates in their communities in several areas across the United States, including Long Island, New York, Cape Cod, Massachusetts, as well as Marin County, Bayview– Hunters Point, and Richmond in Northern California. Bayview and Richmond are both low- income communities of color that have received less media attention than wealthier communities but that have faced significant environmental health challenges due to pollution legacies related to shipbuilding, oil refining, and the power industry. This attention effectively transformed these neighborhoods into epicenters of environmental justice organizing. Breast Cancer Action consistently highlighted the fact that there were many African American women dying at young ages from breast cancer in these communities and that these areas needed more regulatory and scientific attention, due to their proximity to major pollution sources.

In their efforts to reframe the conversation about how to end the breast cancer epidemic, BCA’s early activists combined tactics adopted from protestors and advocates from the AIDS, environmental, and women’s movements and turned those tactics into their own style of direct confrontation with policy makers, research institutions such as the National Institutes of Health, and the pharmaceutical industry. . . . This in- your- face activism ultimately yielded results when, in 1997, Barbara and BCA worked with Genentech to create a landmark “compassionate use” policy under which women with metastatic breast cancer could enter a lottery to receive Herceptin even if they had not been accepted into clinical trials.

Barbara also advanced BCA’s efforts to challenge corporate dominance over breast cancer science in the legal arena: in collaboration with the ACLU, BCA successfully dismantled corporate human gene patents. . . .  [A]s a plaintiff in this historic Supreme Court case, which was decided in 2013, BCA helped end the corporate stranglehold on human genes, which has facilitated data sharing and enhanced the availability of affordable genetic testing for at- risk patients with strong family histories of breast and ovarian cancer. BCA was the only national breast cancer organization to collaborate on this legal case, in part because Barbara leveraged important linkages between breast cancer and civil liberties advocacy and, as she pointed out, “Sooner or later, all issues of social justice are connected.”

Barbara’s push for philanthropic accountability within the breast cancer movement bolstered BCA’s efforts to advance the “three Rs” of breast cancer science— relevance, rigor, and reach. Relevance refers to whether science is asking the right questions and emphasizes underlying causes, including exposures to environmental chemicals, and assessment of the effectiveness of strategies for true prevention. Rigor refers to the promotion of good science— in study design, data collection, and results interpretation from research on the causes, prevention, and cure of breast cancer. Reach encapsulates how knowledge is disseminated to diverse audiences in the regulatory, policy, and public arenas to empower women living with breast cancer to take collective and individual action.

Barbara advanced the three Rs of breast cancer science through her constant presence at research conferences and scientific forums where new discoveries and advances in treatment regimens were presented. At these venues, she boldly pushed scientists to directly address the significance and implications of their research for women living with breast cancer. In one instance, while attending the San Antonio Breast Cancer Symposium, a presenter described how breast cancer patients were “failing treatments,” and in response, during the question and answer period, Barbara deftly reminded him and the other scientists in the room that “patients don’t fail treatments, treatments fail patients.”

Barbara also vocally challenged the mainstream cancer establishment’s promotion of population- based mammography screening as an effective prevention tool, by pointing out that mammograms do not in fact prevent breast cancer: once screening discovers a cancerous tumor, it has not been prevented. By incessantly arguing that such prevention messages were misleading to women, Barbara and Breast Cancer Action forced other cancer organizations, such as the Susan G. Komen Foundation, to change their message on mammography screening from “early detection is the best prevention” to “early detection is the best protection.” Barbara rejected this small concession as equally problematic by highlighting emerging scientific evidence that questioned the conventional wisdom about the effectiveness of mammography at saving lives, particularly for women younger than fifty. . . .

Barbara’s Legacy and the Road Ahead

With her deep roots in civil rights and women’s rights activism, Barbara, as BCA’s first full- time executive director and in collaboration with other activists, played a critical role in fundamentally transforming the breast cancer movement toward a more forward- thinking and politicized form of advocacy. This shift has yielded significant accomplishments, including a national movement that has reoriented discourse about breast cancer from an individual problem to a social and public health issue; broader public awareness about the limits of behavioral factors in explaining the steady rise in breast cancer incidence and the need to understand environmental links to the disease and participation of women living with breast cancer in the research process. Barbara connected women’s bodily experiences of breast cancer to a socioeconomic structure that exposes people to multiple environmental hazards, and she tirelessly challenged dominant scientific, medical, corporate, and political institutions as well as other breast cancer groups that emphasize treatment over prevention. While never losing sight of the importance of treatment for women living with breast cancer, Barbara insisted that reorienting activism toward true prevention compels us to understand what it is about a modern consumer society that has increased women’s susceptibility to breast cancer and to demand that policymakers and scientists do more to promote the health of communities rather than simply the health of individuals.

Printer friendly
Share this:
This entry was posted in Articles, E-Alerts.