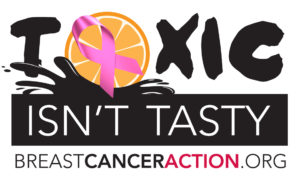 “We’re outraged that agricultural companies are using oil corporations’ leftover wastewater to grow their produce. We believe this is an urgent public health issue because of the potentially hazardous chemicals associated with the oil extraction process,” said Karuna Jaggar, executive director of Breast Cancer Action. “These companies are also putting pink ribbons on their citrus, which means they’re pinkwashing.”

“Many pink ribbon campaigns are more focused on marketing than women’s health,” Jaggar said. “Companies have learned that pink is profitable.”

Oil companies use hundreds of chemical additives during the oil extraction process—to drill, maintain and clean their wells. In addition, the oil extraction process releases chemicals that are trapped underground. So when oil is extracted from underground reservoirs, wastewater comes back up with it and can contain all sorts of chemicals. Oil wastewater used for food irrigation has been found to contain the chemical benzene, a known human carcinogen linked to breast cancer. The Environmental Protection Agency’s Maximum Contaminant Level Goal for benzene in drinking water is zero, which means “there is no dose below which the chemical is considered safe.”

“Using oil wastewater to irrigate our food has not been proven safe—neither for the health of the public nor for the health of farm workers, who are exposed firsthand to these chemicals,” Jaggar said. “There are unacceptable gaps in the testing and treatment of potentially hazardous chemicals in this irrigation water.”

A new technical report released today by the Physicians, Scientists & Engineers for Healthy Energy (PSE Healthy Energy), University of California – Berkeley, Lawrence Berkeley National Laboratory and the University of the Pacific calls for a more thorough investigation of the potential health risks associated with using oil wastewater for crop irrigation. Of the chemicals they were able to analyze, they found that “46 (43%) of them can be classified as potential chemicals of concern from human health and/or environmental perspectives and require more thorough investigation.”

The report also states that 38% of the chemical additives could not be “sufficiently identified for preliminary hazard evaluation” because of trade secrets.

The use of oil wastewater for food irrigation is expanding rapidly in California, which is the U.S.’s third largest oil-extracting state, and which also produces over 1/3 of the nation’s veggies and 2/3 of its fruits and nuts. Oil corporations are increasingly supplying their wastewater to California-based agricultural companies like Bee Sweet and Wonderful to use for food irrigation during an historic drought.

In August 2016, BCAction and its members joined with 350,000 concerned people who wrote to California Governor Jerry Brown urging him to end the use of oil wastewater for crop irrigation. To date, he has failed to do so.

“We, along with other public health groups and scientists, believe that wastewater from any oil extraction processes should not be used to grow our food, to protect both farm workers and the public from potential public health risks that have not been adequately studied,” Jaggar said. “In the absence of strong government action, we’re calling on Bee Sweet Citrus and Wonderful Citrus, companies that say they care about women’s health, to stop using oil wastewater to irrigate their food crops and to use their power to stop the use of oil wastewater for growing food altogether.“

Wonderful Citrus is the nation’s largest citrus grower and is a subsidiary of Wonderful Company, a privately held $4.8 billion company owned by billionaires Stewart and Lynda Resnick.

Since its launch in 2002, Breast Cancer Action’s Think Before You Pink campaign has called for transparency and accountability in breast cancer marketing and pink ribbon promotions.

Find out more at http://www.bcaction.org.