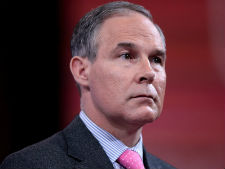 Since our founding, we’ve worked to stop cancer before it starts by seeking to eliminate toxic chemicals in our environment—in our water, air, food and products we use daily—that increase our risk of breast cancer and which can interfere with breast cancer treatments. Everyone in the U.S., especially those with the least resources, depend on the Environmental Protection Agency (EPA) to protect us from significant environmental risks where we live, learn, work and play.

That’s why we’re outraged that President-elect Donald Trump has picked Scott Pruitt to lead the EPA. Rather than protecting us from the toxic chemicals linked to breast cancer in our environment, Pruitt’s record shows time and time again that he puts corporate profit before public health.

Here are some of the ways Pruitt’s confirmation would threaten the health of women living with and at risk of breast cancer:

We need an EPA administrator who is going to protect us from being exposed to chemicals linked to breast cancer—not work with corporations to bring the agency down!

Ultimately, Pruitt is an anti-science, corporate crony who will not work to protect women’s health. Tell the Senators holding his hearing to do everything in their power to block his confirmation.

The U.S. Senate Committee on Environment & Public Works will hold a hearing on Pruitt’s nomination on Wednesday, January, 18 at 10 a.m.ET.

Starting today please call members of this Committee in this order of priority:

Here are the Committee members:

Hello, my name is [your name] and I am calling regarding the Committee on Environment & Public Works’ Senate hearing on the nomination of Scott Pruitt to be the Administrator of the Environmental Protection Agency.  [If you vote in the Senator’s state, say: I am a constituent of {Senator’s name}].

I want [Senator’s name] to do everything in their power to block Pruitt from leading the EPA. As someone [explain how you’ve been affected by breast cancer or why you care about the breast cancer epidemic], this issue is very important to me. Scientific evidence has long showed that numerous environmental exposures can increase our risk of breast cancer—and can even interfere with common breast cancer treatments.

Pruitt cannot be trusted to protect us from the toxic chemicals linked to breast cancer in our environment. His record shows that he is anti-science, pro-industry and ultimately puts corporate profit over public health. I urge Senator [Senator’s name] to stand up for women’s health and oppose Pruitt’s nomination. Thank you.

NEXT STEP! Click here to help block Tom Price as next HHS Secretary.