Are you angry? We sure are. But together, we need to keep fighting for what we deserve: health justice for all women at risk of and living with breast cancer. 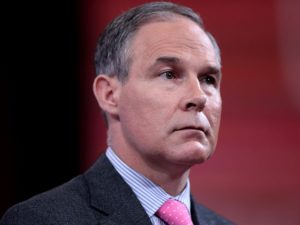 One way we can do this RIGHT NOW is by telling our Senators to do everything in their power to block Scott Pruitt from leading the Environmental Protection Agency. The Senate may vote on his nomination THIS WEEK!

Here’s a reminder of how Pruitt threatens our protection from toxic chemicals in our environment that increase our risk of breast cancer:

Urge your Senators TODAY to take a strong stand for women’s health by doing everything they can to resist Pruitt’s confirmation.

It’s our right to have an EPA administrator who is going to protect us from being exposed to chemicals linked to breast cancer—and our elected representatives shouldn’t accept anything less.

Printer friendly
Share this:
This entry was posted in BCA Action Alerts, E-Alerts.