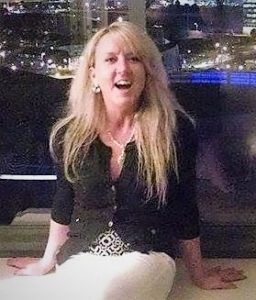 My history with cancers and dealing with disease comes from a very disheartening and terribly personal source. I grew up as a proud “military brat” on a Marine Corps base that has now been cited as potentially the “largest water contamination in U.S. history.” As a child, we did not know that we were being exposed to volatile organic compounds in our drinking water. It was completely unknown to us at the time that we were drinking, bathing and cooking with highly contaminated water. TCE, PCE, DCE, Vinyl Chloride, BTEX and others were later found to be present in the water. This travesty affected thousands of people, many who suffered and are still suffering from various cancers, birth defects and neurological disorders.

In 2002, I was diagnosed with stage IV Non-Hodgkin’s Lymphoma. I was quickly treated with aggressive chemotherapy and radiation, and I also participated in a clinical trial. During my first round of treatments, they hinted that I might end up with a secondary cancer, especially of the breast, from my exposure to radiation for the lymphoma. Like clockwork, in May of 2016, this became my reality. Fifteen years after my radiation treatment for lymphoma likely caused by toxic chemical exposure, I was diagnosed with stage II breast cancer.

I am a mother of three teenage daughters—one who was born with spina bifida. My daughters have witnessed my cancer diagnosis, treatments and all of the many highs and lows that accompany each. I wish for them to live a life free of the fear, free of this harmful and rudimentary system of treatment we have in place for cancer “care”. There MUST be another way.

As a reflexologist, aromatherapist, reiki practitioner and instructor, I have found health and abundance in the purest forms with alternative care. Although it is complimentary to the medical doctor, I find and promote that a life free of poisons and toxins is the way to achieving health. My goal and my desire is to promote information about poisons in our environment and their effects on our health – and to take action for a future different. . My wish is for everyone, regardless of financial status, ethnicity or location, to have the equal opportunity to live a fulfilling and healthy life with all of the proper care available to each and every person.

I became involved as a Breast Cancer Action Community Leader after feeling bombarded by pink during my breast cancer journey. When going through treatments for Non-Hodgkin’s Lymphoma, I became very much a part of all of the walks, relays and cancer awareness activities for breast cancer because I couldn’t find any for the type of cancer I had at the time. I was surprised and a bit bewildered to witness all of the excitement over the pink cause. It was a merchandising powerhouse and almost seemed oddly celebratory, considering what we were going through. Once diagnosed with breast cancer, I began receiving everything PINK: pink tote bags, pink lip gloss, pink bracelets, pink t-shirts, pink stickers and pens.

My experience with breast cancer was so far from pretty and pink and happy and jovial. It was harsh. It was emotionally devastating and completely unexpected. I was inundated with the celebratory pink supplies and gear for my journey. It angered me. I vowed to do everything to change the perception and experience a breast cancer patient goes through. That is when I viewed a documentary called Pink Ribbons, Inc. Eventually I found my way to Breast Cancer Action and it felt like home. Everything I was feeling and experiencing seemed understood by them on an entirely new level. It is now my hope to make a difference in my community as a Community Leader and put a stop to the cancer machine that has gotten out of control. I look forward to educating others by acting as a liaison between Breast Cancer Action and my local legislators, community, neighbors and friends.