Acting Out – For the Health of It

Thank you to everyone who supported the 5th annual Acting Out – For the Health of It variety show on February 9, 2017!  It was a fun and provocative evening filled with bold performers who all share a commitment to health justice. Thank you! 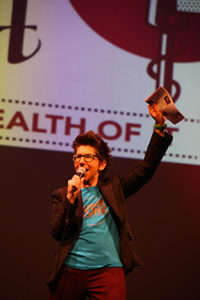 Tania Katan is an award-winning author, keynote speaker and creative trespasser who believes in storytelling at all costs! Katan has performed her stories at the Edinburgh Festival Fringe, NPR, and Comedy Central Stage. Her work has been written about in the New York Times, Huffington Post, BuzzFeed and more. She holds a degree in Theatre, is a graduate of Creative Capital’s Professional Development Program and is certified as an Anti-Bias & Diversity Trainer. She is also the author of the powerful and hilarious memoir My One-Night Stand With Cancer. 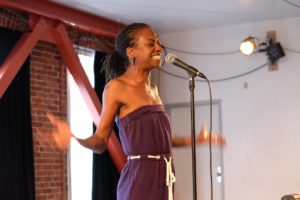 Nazelah Jamison—spoken word. Nazelah Jamison is a gifted poet, emcee, and vocalist who has learned from and graced the stage with some of the finest people in entertainment today. She has competed on and/or coached 12 National Slam teams; and has performed poetry & music across three continents. Until she retired (ha!) in 2014, she hosted and co-produced The Oakland Poetry Slam & Open Mic, an ongoing monthly poetry slam in Oakland, CA, as well as performing at venues around the San Francisco Bay Area and the country. She has collaborated on music recording projects with the Rondo Brothers, and is embarking on a career as a stand-up comedienne. Her first collection of poetry, Evolutionary Heart, was released by Nomadic Press in Fall 2016. Nazelah is well-known and beloved for her work with Spearhead and the French music group, Les Nubians, and her love of hip-hop translates onto the stage. 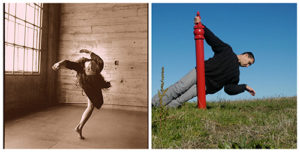 Jo Kreiter and Vitali Kononov—improvised duet performance. Jo Kreiter is a San Francisco-based choreographer and site artist with a background in political science. Through dance, she engages imagination, physical innovation and the political conflicts we live within. She is the founder and Artistic Director of Flyaway Productions. Her performance career both on and off the ground spans 30 years and four Isadora Duncan Dance Awards, as well as awards from the Center for Cultural Innovation, New Music USA, the Artist Investigator Project of the California Shakespeare Company, the NEA, CA Arts Council, Creative Work Fund, MAP, the Wattis, Rainin and Gerbode Foundations, the SF Arts Commission, and the SF Bay Guardian GOLDIE. Vitali Kononov is a movement artist, bodyworker and somatic movement educator, working with improvisation as a performance discipline, therapeutic tool and a contemplative practice. He was born in St. Petersburg, Russia and has been teaching contact improvisation since 1997 in Russia, Europe, USA and Mexico. His background includes contemporary dance, physical theater, contact and ensemble improvisation, Somatic Movement Therapy, Body-Mind Centering and yoga. 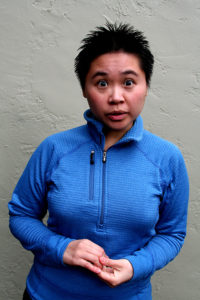 Thao Ngyuen—comedy. Thao Nguyen has been writing and performing solo shows since she joined the Solo Performance Workshop in 2007. Her full-length one-woman comedy, Fortunate Daughter, was named one of the Top 10 Bay Area Plays of 2013 by KQED Year in the Arts and she was featured as a closing act at the San Francisco Theater Festival four years in a row (2009-2012). Fortunate Daughter‘s wildly successful runs in San Francisco, Berkeley, and at the New York International Fringe Festival have resulted in rave reviews and plenty of sold-out shows. 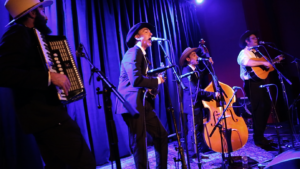 Rusty Stringfield—music. Born in San Francisco’s Mission District, this high energy acoustic four piece has been spilling out of their corner pub and onto some of the finest stages in town. No song is safe once Rusty Stringfield get fired up, on the street corner or round the campfire. Take a twisted trip from traditional bluegrass to soul, reggae, and arena rock (maybe all at once). Get ready for tight harmonies, tasty instrumentals, and a side of accordion. Prepare thyself for a foot stompin’, two steppin’ good time. 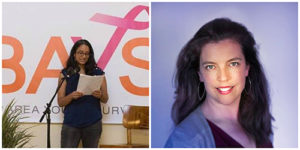 Yamini Kesavan Ranchod and Alexandra Fraser—reading. Yamini Kesavan Ranchod and Alexandra Fraser are members of Bay Area Young Survivors (BAYS). Yamini is an epidemiologist interested in the social determinants of health. In 2011, she moved from Michigan to the SF Bay Area where she completed her post-doctoral research at UC Berkeley. Yamini was diagnosed with breast cancer in 2010 at the age of 31 and was fortunate to find sisterhood with BAYS. Alexandra Fraser is an environmental scientist who used to spend summers living in a tent and working as a field biologist, but today she lives in downtown San Francisco and works to obtain the environmental approvals for major infrastructure projects. Her family is car free. After surviving cancer, it doesn’t seem so scary to cycle-commute with her preschooler through downtown San Francisco. Alexandra is living with lymphedema caused by her treatment for breast cancer nine years ago. 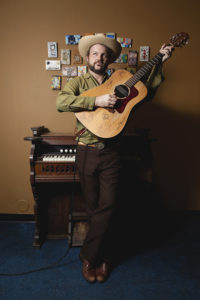 “Misisipi” Mike Wolf—music at VIP reception. Misisipi Mike is a country and folk singer/songwriter currently living in San Francisco. His songs can be described as humorous, sentimental, melodic and danceable, traits likely learned from his childhood in the musical gumbo of New Orleans and the Mississippi Gulf Coast. A stylistic comparison could be made to a little bit of Ray Davies and a little bit of John Prine, with a little Jonathan Richman and Willie Nelson in the mix as well. The end result is a mongrel mix all Mike’s own. Misisipi Mike was twice voted “Best Singer/Songwriter” by the San Francisco Bay Guardian. His songs have been featured in theatrical releases, many network television programs, and Netflix and Amazon original series. A tribute to his songwriting has been recorded by a collective of musicians based in St. Louis for the upcoming release “A Toast To Absent Friends:The Songs of Misisipi Mike”. When not performing his own music Mike plays lead guitar in several Bay Area bands, including Sonoma’s The Easy Leaves and Oakland’s Actual Wolf.

Thank you to our event sponsors!

Special thanks to our event committee members

Thank you to these local businesses who are donating food for the event!