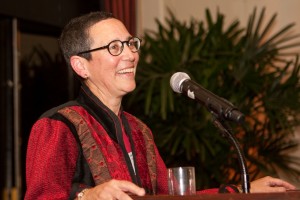 Even after ALS had silenced her vocal chords, Barbara Brenner’s powerful voice continued to send tremors into the medical establishment.

With the assistance of a text-to-speech computer program, Brenner, the former executive director of Breast Cancer Action, sent stinging missives to the head of the ALS clinical trials program and Food and Drug Administration officials, and continued her less public work of advising others dealing with ALS and breast cancer.

Brenner died from complications of ALS (amyotrophic lateral sclerosis, a progressive neurodegenerative disease that affects nerve cells in the brain and spinal cord, leading to death) on May 10, 2013 at age 61 at the home she shared with her partner of 38 years, Suzanne Lampert, in San Francisco.

Under Brenner’s leadership, BCA grew into a national organization, and one that changed the conversation in breast cancer advocacy from building awareness to demanding research on causes and prevention.

BCA became the first breast cancer organization to refuse funding from any corporation that profits from cancer or contributes to cancer by polluting the environment. It was such a surprising policy that it was written up in the Journal of the National Cancer Institute.

The policy also unleashed the organization’s ability to take on daunting targets, such as big pharmaceutical companies, and groups once seen as untouchable, including the Susan G. Komen Foundation, that collaborate with corporations that endanger women’s health.

These were difficult decisions for the BCA board and membership. Brenner worked hard to explain the policy: “In our health care system, which is driven primarily by private profit, most of which goes to corporations, public messages about breast cancer tend to serve profits, not people,” she wrote in The Source, the BCA newsletter.

“If you follow the money, you can pretty much tell what positions people and organizations will take on breast cancer issues,” she wrote, citing the example of the fast track approval that the FDA gave to Genentech for its drug Avastin for use in treating breast cancer. BCA had opposed approval because the drug had deleterious side effects and there was no evidence that it extended the life of breast cancer patients. Cancer organizations that received funding from Genentech were silent. Three years later, the FDA withdrew its approval.

One of the most successful – and controversial – of the BCA campaigns was “Think Before You Pink,” launched in 2002, exposing how pink ribbon marketing did not help fund prevention or find a cure for breast cancer. BCA coined the term “pinkwashing,” exposing the hypocrisy of companies that used the pink ribbon to boost sales but covered up their own record of selling cosmetics, foods and other products that harmed women’s health. Brenner used to say, “If shopping could cure breast cancer, it would be cured by now.”

BCA targeted everything from pink buckets of Kentucky Fried Chicken and pink-lidded Yoplait yogurt to “Clean for the Cure” Eureka Vacuum Cleaners and pink Ford cars. Brenner’s sharp critique was highlighted in the 2012 film, “Pink Ribbons, Inc.” and even cited by Stephen Colbert.

Medical sociologist, Gayle Sulik, author of Pink Ribbon Blues said, “Barbara Brenner was powerful, at times obstreperous. She never seemed to be afraid to call things as she saw them, and it didn’t seem to matter who got upset about it. Barbara reminded us that sometimes it takes ruffling a few feathers to dislodge complacency.

“Who will push us to stretch our minds and abilities until we pave a new road in breast cancer? Who will remind us that if we are comfortable with the pink ribbon state of affairs, then we are part of the problem? It’s up to us now,” Sulik added.

Another controversial issue that Brenner took on was the over-promotion of mammograms. She wrote, “The dominant message about mammography is that it will save your life. That message is so oversimplified as to be dishonest. Mammograms can only be life- saving if they find a cancer that is treatable and if the woman gets treatment in a timely way – and one of the known causes of breast cancer is ionizing radiation, the kind you get from medical X-rays.” She warned that the science about the potential harm of over use of mammography was being discounted or ignored. Her position was recently confirmed by the FDA, which revised its recommendations concerning the frequency of screening mammograms for healthy women.

Cindy Pearson, executive director of the National Women’s Health Network, said, “Barbara made things happen in the world of breast cancer. She was responsible for changing the way women thought about breast cancer, and moved people from awareness to activism. Under her leadership Breast Cancer Action developed powerful campaigns that changed corporate behavior, clinical practice and research agendas.”

By the time Brenner stepped down in 2010, an earlier retirement than planned because of her ALS diagnosis, the organization had grown exponentially. “We started with a mailing list of 3500, “ she recalled, “half of which were bad.” By the end of her tenure, membership numbered 50,000. Brenner also used a wide variety of strategies including media, advising medical panels, and pressuring governmental agencies for research on prevention. But BCA never held a corporate- sponsored walk. Brenner noted, “You can walk to cure almost any disease now. I do wish that worked, but it doesn’t.”

A prolific writer of commentaries and op-eds, Brenner contributed to the section on breast cancer testing in the 2005 edition of Our Bodies, Ourselves and wrote the chapter “Sister Support: Women in the Breast Cancer Movement in Breast Cancer: Society Shapes an Epidemic (St. Martin’s Press, 2000). In the latter chapter, Brenner wrote: “Social change—both in the movement itself and in the scope and nature of the breast cancer epidemic—will come slowly. When that change does come, the result will be that all women with breast cancer will have clear choices for treatments that cure their disease without causing another one, and all people will live in a world where they are protected from the known causes of breast cancer. The road from here to there remains unmapped, but the breast cancer movement may yet pave the way.”

Judy Norsigian, executive director of Our Bodies, Ourselves, said that Brenner’s leadership among breast cancer activists and the wider women’s health movement is legendary. “So often it was her unique combination of guts, tenacity, brilliance and good humor that inspired the rest of us to keep our social justice goals front and center,” Norsigian said.

Known for her eloquence and wit, Brenner was a much sought after speaker and media commentator. She made complicated medical issues and environmental science understandable to grassroots activists and breast cancer support groups; at the same time she was unflinching with her critiques of hypocritical corporate policies at national professional meetings.

Author Anne Lamott, whom Brenner drew into BCA activism, said, “There are so few people telling the truth in the popular culture, There is nothing more nourishing or that makes us feel safer in the world than a person we can trust to tell us what is real and what is B.S.”

Brenner’s activism started early. Raised in Baltimore in a family of seven children, she remembers hearing Martin Luther King, Jr. when her mother took her to a civil rights march at age 10. At Smith College she was active in the anti-war movement, including shutting down the campus in 1970 as a protest against the war. At graduate school in Princeton, she came out as a lesbian in the early 70s, and the experience radicalized her. It was there that she met Lampert and they formed a bond that was to endure for four decades.

Together they moved to Los Angeles, Lampert’s hometown. Brenner started working with the women’s rights project of the ACLU of Southern California, where she realized how the law could be used to effect positive change. It led her to attend UC Berkeley Boalt Hall School of Law (now Berkeley Law School) and intern at the ACLU of Northern California in San Francisco.

After law school, she clerked for U.S. District Court Judge Thelton Henderson, a distinguished jurist who had been the first African-American to work for the Civil Rights Division of the U.S. Justice Department. She later became a partner at Remcho, Johansen & Purcell, a California law firm specializing in public policy and constitutional issues. Brenner also formed her own firm with Donna Hitchens, working primarily on civil rights and employment discrimination.

“Barb was a zealous, smart and compassionate advocate for her clients and was never intimidated by her opposition even when they were far more experienced and better financed. She was a wonderful law partner,” said Hitchens, now a retired judge of the San Francisco Superior Court.

As a lawyer, Brenner served on the affiliate and national boards of the ACLU, and volunteered as a cooperating attorney on civil liberties cases.

Dorothy Ehrlich, former director of the ACLU of Northern California, said, “Barbara and the ACLU have always been a perfect fit: she had that lawyers’ love of precision – getting the policy exactly right – and the activists’ passion about the issues of social justice. She is the most courageous advocate I have ever known.”

Brenner’s expertise on civil liberties and breast cancer advocacy were joined last month [in April] when the ACLU was before the U.S. Supreme Court challenging human gene patents, specifically those genes that indicate a predisposition for breast cancer.

Brenner immediately understood the effect this would have on the lives of millions of women and their families. Breast Cancer Action was the only breast cancer organization to stand up as a plaintiff in the case.
According to ACLU Executive Director Anthony Romero, “The possibilities for expanded scientific and medical research are tremendous, and Barbara’s bold leadership enabled the ACLU to be in this fight. When these patents are overturned by the Court, this will be yet another example of Barbara’s intrepid vision and strength.”

Though she was involved with health policy on a national level, Brenner always found time to provide compassionate advice to countless women who contacted her when they received a breast cancer diagnosis. Although debilitated with ALS, she became adept at using technology and social media to continue to consult with newly-diagnosed women and to share her expertise and experience about ALS as well.

On her blog, Healthy Barbs, she wrote both about her own daily struggles with ALS and about her anger over profit-driven health policies. She also used social media, including Facebook, to provide play-by-play accounts of her beloved San Francisco Giants.

Lampert described Brenner as “living with ALS instead of dying of ALS.” Until the last week of her life, she enjoyed going on “roll and strolls” in Golden Gate Park and other favorite places in SF; attending plays and concerts, and carrying on a lively e-mail correspondence with friends and relatives around the country.

Brenner was awarded numerous honors, including a Jefferson Award for Public Service in 2007. In 2012, Brenner was honored by her alma mater with the Smith College Medal and by the ACLU of Northern California with the Lola Hanzel Courageous Advocacy Award.

As her illness limited her physical mobility, Brenner delved into scholarly pursuits, including Jewish studies. She adopted the Hebrew name “Shefa” which means abundance. She had discovered a Jewish practice in which some people with life-threatening illnesses change their names to fool the angel of death, and, she said, “it sounds like a great idea to me.”

In addition to Lampert, Brenner is survived by her siblings Joseph S. Brenner, Mark A. Brenner, Nanci E. Grail (Donald Grail), Richard D. Brenner (Barbara), and Lawrence M. Brenner (Roderic Hooks), and eleven nieces and nephews, all of whom live in the greater Baltimore area. She is predeceased by her parents, Morton A. and Bettie B. Brenner, and her sister Ruth B. Newman.

At her request, contributions in lieu of flowers may be made to the Barbara Brenner Rapid Response Fund at Breast Cancer Action.